Greg Navratil’s interest in art began early. At age seven he had a drawing of a dog, “with eyes as big as sewer lids”, published in the Denver Post. That same year he won his first award – a pack of Juicy Fruit gum – for a clay sculpture of a cowboy sitting on a fence and twirling his lasso overhead in a school composition. At age eleven, he drew the monthly comic strip for the school paper. This interest continued throughout his school years. After serving in the U.S. Army, he studied sculpture and painting at Metropolitan State College in Denver. After receiving a B.F.A. degree, he continued what he did in college by making constructivist paintings. These were exhibited in many shows. He also screenprinted, art directed, signpainted, illustrated a few books, took two solo bicycle trips across the United States and Canada, and built a three story cabin by hand. His neighbors called this cabin a lodge, he called it a giant sculpture. 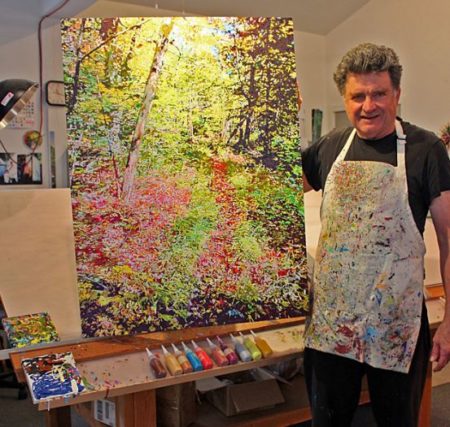