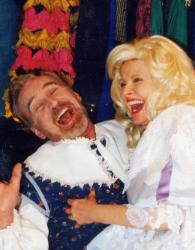 Edward’s Blissful Romp Across a Colorful Musical Spectrum with Tunes from Movies and Broadway, a Touch of Comedy and More.

Rookie of the Year Award Winner, 2007

Edward James has been a theater professional for more than thirty years. After earning a Masters in Playwrighting, he developed his acting chops across the Midwest and South working at such prestigious theaters as The Tyrone Guthrie, Actors Theater of Louisville and Kentucky Shakespeare Festival. He lived a decade in New York, doing regional theater and appearing on All My Children, Guiding Light, The Cosby Show and Dr. Ruth, among others. For thirteen years, he was the Artistic Director of Sylvia’s Class Act Dinner Theater in Portland, producing and directing 50 plus shows. And, once upon a long time ago, he was a military intelligence agent.