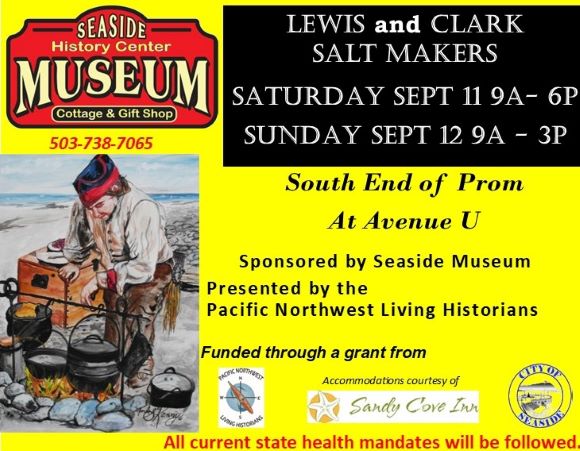 What do you do when you run out of salt – and the nearest store is more than 2,000 miles away?
When the explorers of the Lewis and Clark expedition arrived at the Pacific coast in 1805, they needed salt to preserve meat, along with adding a little flavor to their meals. But the supply of salt which they acquired in St. Louis, before they began their long and arduous voyage across the vast American West, was exhausted.
So the members of the Corps of North Western Discovery – as Captain Meriwether Lewis called the party in his journal – did the only thing they could: make their own salt.
On December 28, 1805, Lewis and Capt. William Clark sent forth a special detachment from their just-completed winter quarters at Fort Clatsop. Five men travelled overland from the Fort to the coast, searching for the best location for making salt. On January 1, 1806, the fifth day of their search, these men found the perfect spot and set up camp: the beach of present day Seaside, Oregon. They proceeded to make salt by boiling sea water for nearly two months, all while enduring the wet winter weather, before they returned to Fort Clatsop.
On September 11th and 12th , the Seaside Museum, assisted by a grant from the city of Seaside Tourism Advisory Committee, sponsors Lewis and Clark Salt Makers. Members of the Pacific Northwest Living Historians (PNLH) will create and share the experience of that exploration group, bringing to life the salt camp which those explorers established more than 200 years ago. The program will be held from 9am to 6pm on Saturday and 9am to 3pm on Sunday. The event site will be on the Seaside beach west of the Avenue U and Prom intersection.
Visitors to the program will enter the camp and find members of the PNLH busy making salt, as they boil sea water over a fire just as the men of the Lewis and Clark expedition did in 1806. The interpreters will also share the history and stories of the legendary expedition with everyone who comes to the beach.
Lewis and Clark Salt Makers is a free interactive learning opportunity for the whole family. This event is sponsored by the Seaside Museum and presented by the PNLH. A portion of this project was made possible through a grant from the City of Seaside Tourism Advisory Committee, funded by room tax dollars. The program is also supported by the Oregon Parks and Recreation Department, Seaside Public Works Department, and Sandy Cove Inn.
Current guidelines regarding face coverings and open fires will be followed.
Saturday 9/11 9A-6P; Sunday 9/12 9A-3P