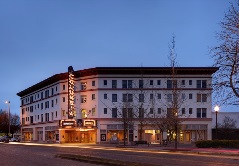 November 19th is your only chance to experience the classic silent film “The Hunchback of Notre Dame” starring Lon Chaney as it first appeared in 1923. The showing will take place at the Columbia Theatre, a 1925 Historic Landmark in Longview, WA (half-way between Astoria and Portland). A new musical score by Rodney Sauer will be performed by members of the Vancouver Symphony Orchestra. General Admission tickets are $25. Call the Box Office at 360.575.8499

The film elevated Chaney, who was already a well-known character actor, to full star status in Hollywood, and also helped set a standard for many later horror films, including Chaney’s The Phantom of the Opera in 1925.

Chaney plays Quasimodo, the tragically disfigured bell ringer from Victor Hugo’s sprawling tale, set in 1482. A vast set of medieval Paris was constructed for this film, and the enormous sets and scenes of vast crowds help put the film on an epic level. A fast-moving plot involves knights, street performers, revolutionaries, a stolen baby, and the culminating attack by a crazed mob on Paris’ most famous building.

Rodney Sauer has compiled a new score for the film, including music that was written especially for the film in 1924, which matches the romance and action of the film. He will perform with members of the Vancouver Symphony Orchestra. Sauer is a member of the Mont Alto Orchestra, which has scored over 125 silent films and recorded over 40 film scores.